4 Major Barriers to Standing in Your Professional Authority 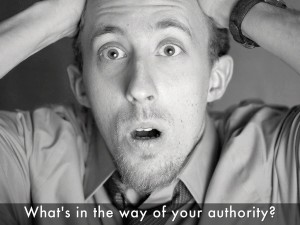 Ann’s boss was one of those bosses. Think: Devil Wears Prada.
Although Ann’s boss was well-respected in the field, efficient, organized and detail oriented, she also had a reputation for being uncaring and highly critical. Her employees made a pastime of disliking her.

And then, just a few years after working for “Cruella,” Ann found herself in a pretty cushy position, leading a team of copywriters at a new firm.

“No matter what I do, I’m not going to be my old boss,” she said to herself, over and over again.

Ann started off well-liked. She was fun, hard-working and personable. She developed relationships and cultivated trust, taking everyone out for coffee to hear their personal work stories and preferences. When problems arose for her teammates, she always understood and found ways to help them win and get their work done, sometimes stepping in to do it herself.

But within six months, Ann had a situation on her hands. The group got two new important clients at once with deadlines close to one another. People had to work harder and more closely together, and new team members were hastily added to manage the workload. Several on her team would wind their way into her office to complain and talk things through — at first a few times a day — and then it seemed, about every other moment. Anne was so consumed with putting out technical and emotional fires, she had no time to do her work.

Ann found herself fighting the urge to tell them to ‘stop complaining, figure it out and go do their work,’ but she wouldn’t dare. She didn’t want to be uncaring, like her old boss. So instead she would hold group meetings to reassure people they were being heard and strategize together. Instead of figuring things out, however, her team used the time to complain about territory, the new hires and workloads. Ann was filled with anxiety as she found her team farther and farther away from meeting the fast approaching deadlines.

It’s a relatable problem, yes? It’s one that afflicts not only bosses, but also parents, teachers, and the like. It’s what happens when your default leadership strategy is to not be someone else.

Here are four factors at play that were keeping Ann out of her authority, ones that you might relate to:

1. Being more concerned with being nice than with doing your job

Ann’s job was to get people to do their work — with tact and kindness, whenever possible of course — but instead of doing her job and standing in her authority, she was coddling, placating, and feeling overwhelmed.

2. Being too concerned with other people’s feelings

Ann genuinely cared about her team, but she couldn’t step into her authority because she didn’t want them to be upset when she had to say “no” to any request. Empathy is an important skill for a leader, but feeling responsible, or overly concerned with other’s feelings, makes for a therapeutic work environment, not necessarily a productive one. Ann’s care for her team would have been better expressed if she found creative ways to get them to figure things out and do their work.

Being somewhat new in the position, Ann felt alone. She didn’t want to go to her new bosses and tell them what was happening, because she was afraid they would either think she was inept, or tell her to simply suck it up and get tough — and she didn’t know to do that from the hole she had dug. She needed the right person — an ally in another firm or department, a mentor, or a coach-like figure — to help her understand the dynamics at play and make more effective choices.

4. Fear of making a mistake

Ann was so afraid to make a leadership mistake with her team, by upsetting them or working them too hard, that she didn’t realize she was making one by not pointing them to their work. In order to really step into her authority, Ann needed to accept that there would be times when she might not be liked and there were times when she would make mistakes, and that her empathetic nature would assist her in being able to make any necessary amends. She needed to see that her team actually wanted and needed her in her authority — even if they protested a little — so that they could find a sense of true teamwork and accomplishment, which would enable them in turn to give Ann the respect she was beginning to lose.

Are there areas in which you find yourself blocked from your authority, at home or at work? Share them in the comments below, and don’t hesitate to reach out.