A Different Kind of Leaning In

Some even find all this “Lean In” talk exhausting. 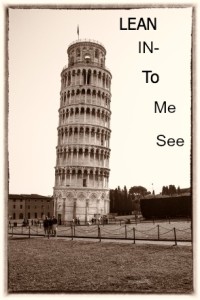 But in this fourth post in the Leadership in Relationship Series, I am going to turn it all on its head by discussing Leaning In as a leadership skill not of career development, but of intimacy, through the story of (pseudonym alert!) Amber and her boyfriend. And in keeping with the trajectory of the series, I will highlight the moments of active leadership between them as the story progresses.

Amber is a high minded entrepreneur. She has big ideas and the connections and expertise to put them into place. She loves her job.

She also has an amazing boyfriend. He thinks the world of her and how she is trying to impact the world with her vision. They moved in together into an apartment with an office space for her.

Pretty soon after that, Amber reported having a negative reaction every time he would walk in the door after work. She felt as though he would come barraging into the space, expecting something from her. She was still in work mode, and this wasn’t working for her. They talked it through and established new ways for them to make the coming home transition easier for them both: he would say “Hi,” but give her 15 minutes before seeking attention. Leadership actions: Defining the problem as a systems issue, creating a new structure for better functionality.

It worked . . . for a few weeks. Even though she loved this man deeply, Amber still cringed upon his return. It seemed crazy. What was going on here? There was still a deeper question for this couple emerging. Perhaps, we explored, it was how he was approaching her. Lo and behold, she felt as though he wanted the type of comfort that made her feel maternal, a role which she found unsexy and cumbersome. She wanted none of it. They talked it through.

He stood his ground, and in an astounding display of stereotypical gender role reversal, stated that he simply wanted to reconnect, cuddle and be close after a hard day’s work. Leadership actions: Clarifying roles and needs, and negotiating them.

Amber knew his requests were not unreasonable. After first looking at the systems in place and then the roles, we concluded that the issue was hers.

This was where she got stuck. We looked to her psychological history and found a few enlightening connections, but none proved transformational. She stayed cool and distant long enough so that he threatened to leave in search of a more reciprocal relationship. He was understandably sick of feeling rejected and having his needs neglected. Leadership action (for him): moving in a different direction.

At this point there was only one thing for Amber to do if she wanted to keep him in her life, which she really, really did:

Lean into the discomfort of comforting him.

Lean in to the discomfort of connecting even though she didn’t feel like it.

Now for those of you who don’t want to do anything when you don’t feel like it because you think it’s inauthentic, I would direct you, as I did Amber, to the authenticity in wanting to take care of the relationship. Amber understood that in going against her immediate feelings, she was serving the call of the heart and being authentic to her values. And ultimately, keeping him in the game.

At first, when she opened herself to connecting with him on workday evenings, she would have a major tantrum inside, but she reminded herself of life without him, and breathed through it. He was very responsive to her affection. And quickly, magically, it became easier, and then natural to connect with him at the day’s end. Predictably, he appeared less needy to her, because his needs were being met. She had mastered “Leaning In” to intimacy.

If the actions of leaning in, identifying relationship problems as solvable systems issues, clarifying roles and negotiating in a healthy way in order to make your relationship great are interesting and appealing, or you would like to learn how to co-lead in love, check out my BRAND NEW Lovers and Leaders Course for couples.

By addressing relationship issues in terms of vision, roles and systems, and by having a partner who is interested and able to negotiate, couples can learn to co-create a working dynamic, and get closer in the process of doing it.

What aspect of your relationship could you simply lean into?

Note: The next article on Avoiding Fights and Fighting Fair will be broadcast to subscribers only.

6 responses to “A Different Kind of Leaning In”