Are Relationships a lot of Work? 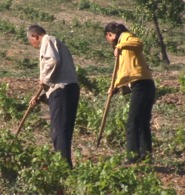 A client came to me distraught.


He had been struggling in his relationship. His fiancée was non-responsive to his needs. She was consumed with and depressed about a touchy situation at work and wanted to stay home, enjoy take-out and watch TV, preferably with but even without him. He accepted this for a few weeks, but it had been dragging on for months.

He tried to coax her into fun. He tried talking to her about getting focused on the wedding plans, but she wasn’t very responsive to his enthusiasm. Eventually, he would get frustrated with the situation and they would have a fight. This drove her further into withdrawal. Then, the cycle would repeat.

He confessed to his mother about having serious doubts about the relationship.

His mother told him, “Relationships are a lot of work.”

This is a popular belief that bears some truth: Relationships can be a lot of work, especially when they are in transitions. Whether it is a transition phase for the relationship as a whole, or for the individuals in them, these times tend to stir up drama and are ripe for sorting things through. Some examples of relationship transitions are:

Examples of transitions sparked by one partner within a relationship are:

This couple had a double whammy: the relationship was in a transition at the same time the woman was in one.

The work that is required in these times is about sorting through expectations and setting up the appropriate structures that will help each partner get their own needs met while attending to the needs of the team. A relationship that is too much work, i.e., filled with disharmony, fighting and processing about the relationship for a prolonged period of time, has probably crossed a line that has not been articulated, and something is not working that may never work.

People begin relationships with conscious or unconscious deal-breakers and non-negotiables in mind: “I can’t be with a smoker”; “I need someone who is financially solvent”. But living with someone can reveal non-negotiables you didn't know you had. Click To Tweet

Once a non-negotiable has been articulated — for this man it was being with someone who wanted to withdraw for extended periods of time — it’s time to take a stand and put structures in place that will shift the dysfunction and enable your relationship to be about something other than suffering and hard work. Or, it could be time to make a break.

It’s a big risk to tell your beloved that you’ve found a deal-breaker in the midst of an established relationship. But consider the alternatives.

It is also an act of leadership. If he risks sharing his deal-breaker with his fiancée, it gives her an opportunity to do some real work on herself, and join him in love.

Does a relationship need to be a lot of work? Click To Tweet Unless you are the type who likes to work on yourself and your relationship all the time, I say, no. Transition phases should be temporary and ultimately strengthen the couple as a team and give way to the joy and camaraderie that brought the couple together.

This is the 1st post in the Relationship as Team Series, next up: How to Keep a Relationship Moving Forward (with minimal “work”). For information on how to work with me as a couple, please click on the link or on Work With Blair from the menu.

6 responses to “Are Relationships a lot of Work?”