How to Fight the Good Fight, Part II: Translate 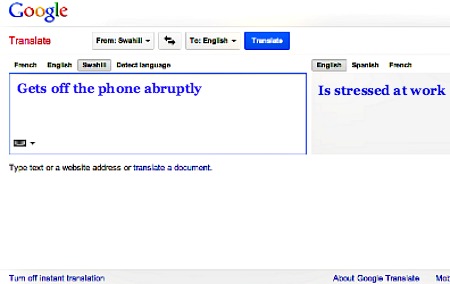 That was the message I got in my direct message box. I was curious, and very grateful to have Google Translator at my beck and call.

“I think I could fall in love with you. Hope to get to know you better.”

Not bad way to start the day, eh? Or, a little creepy depending on who you are, who sent it, and how you look at these things. (It was from a stranger. I thought it was creepy).

But I do love being able to take a sentence in another language, plop it into Google Translator and get a rough idea of what someone has said. Similarly, this is the very skill we each need when wanting to succeed in an intimate relationship: If you don’t understand your partner’s behavior or if something hits you funny, you may want to take a minute to activate your own inner Google Translator before reacting.[click to tweet]

Amy is standing in the kitchen, watching over her three-year-old son while tending to their pasta dinner, when hubby Steve, a VP, walks in. After a long day with a toddler, she is elated and relieved to see him, but after a long day at the office, he simply waves and goes to the bedroom. Her heart sinks.

When he comes into the kitchen and kisses her brusquely on the way to the fridge, he glances at the meal.

Amy throws down the stirring spoon and stomps out of the kitchen. Steve yells after her. The baby cries. She sulks in withdrawal and then they fight about past trespasses for the rest of the evening.

In the scenario above, Steve’s stand-offish entrance was his non-communicative way of communicating he’s had a long, hard day. Amy might have better prepared herself, or avoided the blow up, if she was able to translate this behavior, but feeling tired and in need herself, it was impossible.

In fact, taking a minute to translate is challenging for many of us. In addition to the well-publicized gender differences in communication, it is very difficult to really see our partner as different than us, especially when we are provoked. But this is exactly what we need to do.

In order to preserve the notion of your couple-hood as a team, learn the emotional language of your partner and be cognizant of what triggers them, so your translation gets better and easier. Reading books and talking to others who either know your partner well or who are thoughtful members of the opposite sex (or of the gender role your same-sex partner represents) can help, but

The best thing you can read is your partner. Use your wits. Use your eyes. Use your compassion. Click To Tweet

This way, when delivering potentially unsettling news you can prepare for blowback (instead of resenting your partner for reacting), and engage in a good fight if necessary, as opposed to spiraling in a nowhere one. If, as he approached the front door, Steve was able to take a minute to translate how his gruff actions might affect Amy, he may have been able to reduce her reactivity by uttering, “Hey Sweetie –I’ve had a hard day — I’m gonna take ten” before he disappeared. This small gesture likely would have been able to signal Amy to contain her disappointment. She may even have been less hurt, more curious about him and more playful about the snotty pasta comment.

Translating is an advanced skill that may require some training, but it is so worth the strife it saves. The translator can help you avoid bad fights, keep your heart open and keep you on the road to relationship health.

WARNING! If you are translating all the time, then you are working too hard and not making good boundaries. Don’t confuse the need to translate with a willingness to accept abuse.

If you need help telling the difference, or activating your inner Google Translator, don’t hesitate to reach out.

This is part II of How to Fight the Good Fight. Stay tuned for the third and final post next week: Negotiate.

4 responses to “How to Fight the Good Fight, Part II: Translate”