Holding a Gun — and Power — with Respect 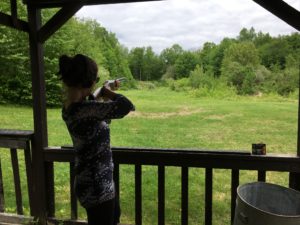 On a recent getaway, my honey invited me to go skeet, or clay bird, shooting. I thought, skeet shooting . . . with a real shotgun?

In March my honey and I marched against gun violence in DC.

Guns scare me. A close friend has several, and even with her responsible ownership, I don’t want to know where the safe is. In my mind, presence begets usage.

The noise, the waste of resources — skeet shooting all seemed pointless. But my curiosity piped up. Conceptually, I understand that we are all capable of creation and destruction, and that both are powerful. It was time to face my fear and explore what it felt like to carry that type of power, which I resist and judge, in my own hands.

The guide was very detailed about all the safety measures, and how to focus, aim and shoot. My mouth went dry and I tried to be still when I held a shotgun in my hands for the first time.

I’m not sure. It was stimulating. Nauseating.

I called out, “PULL!” with command, instructing our guide to release a clay target. My fingers shook when pulling the trigger, and afterwards, when releasing the steaming ammo shells from the barrel, understanding literally for the first time the phrase, “smoking gun.” Honestly, my favorite part of the whole experience was being called Annie Oakley — who I have always admired as a 19th century feminist — after my hyper-vigilant, I’m-so-scared-I’m-smack-in-the-zone beginner’s luck.

Shooting takes ferocity. Focus. And shoulder strength. Yes, there was tremendous power in it. It helped me understand on a physical level why someone who feels powerless on a daily basis would gravitate towards guns.

But there was something else. It reminded me that, in working towards a common goal, true leadership contains not only the power to nurture others and steer them towards their best work, but also, the power to terminate a project or a position if the greater vision calls for it. Sometimes, being able to give critical feedback or a stern warning; halt a project that is going wayward, or fire someone whose capacity is limited, feels like pulling a trigger. It’s part of the job.

A trusted leader who commands respect needs to be comfortable enough with that level of power, and use it with the greatest amount of safety measures in play.

I’ve held a gun. I’ve shot a clay thingy. Now I’m done with guns, and hopefully going back to my executive consulting with a little more ammo for how to help leaders hit their targets.