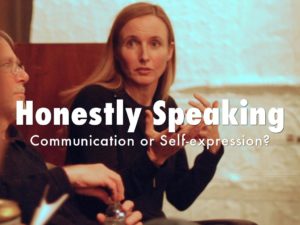 I recently heard the story of a woman who defined herself as “very straightforward and honest.” But her honesty, which included commenting on people’s shortcomings infront of them and others (e.g.,”Last time I saw you, you were skinny — what happened?”), isolated her from many who became wary of her. When she was confronted on her radical and rude behavior, her response was: “I am just being honest, saying it like I see it. It’s the way I am.”

Do you ever feel that honesty is overrated? Don’t get me wrong. After all, as a therapist and consultant I believe in and encourage clear communication and forthright dialogue between oneself and one’s intimates. I also believe in radical honesty as a temporary cure for those who have habitually kept things bottled up and are looking to free their voices. In fact, I went through a phase like this in my twenties, which on the one hand isolated me from some friends and family, but ultimately brought me closer to the freedom and intimacy I was looking for with people who valued feelings and clarity. I learned that I no longer needed to be burdened by holding everything in; that I could survive both speaking up and people’s reactions to my speaking up; and eventually, that I no longer needed to be honest with others about everything all the time.

Honestly, is honesty always the best policy? Click To Tweet When your girlfriend is anxiously flitting about before an important career meeting, and she asks you if she looks fat, is it imperative that you say, “Actually, I’ve been noticing you’ve been gaining a few pounds lately,” for the sake of honest feedback? If your husband has a jealous streak, and one day a handsome stranger tries to pick you up, do you need to share that information with your husband as you recount your day at your anniversary dinner? This type of ill-timed honesty kills intimacy, rather than enhances it.

I spoke with a father who reported hearing the loud crash of his young daughter falling in the next room. His being flooded with panic. As he raced to the scene, something in him shifted. In a split second he realized that his true feelings of terror were not useful in establishing what his daughter might need. In addition, his fear was so extreme it might have made her feel scared, or she might have felt compelled to take care of him. He contained himself, masked his gut reaction and projected the role of “calm good father,” just in time to scoop her off the floor and assess the damage. Thankfully his daughter was OK. This kind of well-timed dishonesty, if it can really be called that, enhances integrity and intimacy.

It is important at home and in the workplace to give clear feedback. But what is important to communicate is facts; not every thought or feeling you’ve ever had. It is important to consider when and how honesty is useful, and how much honesty is necessary to get your point across. It is good to see where some self-containment, little white lies and omissions are occasionally well employed. Therefore, when giving honest feedback, ask the right questions. Here are some guidelines to keep in mind:

When you are about to “be honest”, ask yourself, what is my intention in expressing my truth right now? What is the impact I want to have? In intimate relationships, sharing honest reactions, insights and feelings can be openings to deeper intimacy. At the office, they can inspire better work practices. Risky conversations in which one party shares the negative effects of another’s behavior may be messy, as feelings often get hurt and let loose as part of the process. This is fine, as long as your intentions are to open to more connection or a better environment. Double check to see if your surface intention to be transparent belies a hidden intent to hurt, distance, punish or passively relieve yourself of resentment. Ask yourself: Am I feeling threatened, or secretly resentful? If this is the case, it is usually not useful to express your opinions or feelings in that moment.

The first week at her new job is probably not the best time to tell your new employee that she might not make it at the company. Or to express to your best friend that you’ve been feeling neglected by her. Ask yourself: Is now the right time? Are other people around that could create embarrassment? Will speaking up disturb the flow of the time we are having and is that necessary (sometimes it sure is) or worth it? Giving yourself time and waiting to let the upset settle is an excellent practice when expressing oneself.

If what you have to say is possibly upsetting, you want to pick a gentle environment, preferably a private one. For some reason people usually choose to have heavy conversations in restaurants. We’ve all seen or been the one crying at the table or cooped up in the bathroom trying to attain dry eyes. Pick an environment that involves the least amount of response management. Homes, unpopulated country walks and beaches are good places to start.

Being honest with yourself means being truthful about how you feel. Some feelings are fine for you to know and keep to yourself. This type of honest awareness is not denial, or repressing your feelings, which creates a lot of pressure internally and externally. It is knowing your feelings, but containing them inside yourself, and then acting as the person you want to be. Like the father in the story above, it is okay to put those feelings aside briefly to show up for someone else.

Use Sparingly: The little white lie, the off-white lie and the omission

Sometimes it’s easier to tell your new colleague at work that your eyes are red because of allergies instead of admitting that you were up all night crying. That would be a white lie. You don’t have to get into everything with people you don’t know well or are just getting to know, such as romantic interests. An off white lie would be calling in sick to work and then going scuba diving. Not recommended for use with intimates (except around surprise parties), these are best used with relatives and acquaintances. And the omission: Choosing to withhold from a potential romantic partner your distress that he/she is ten minutes late, or not sharing a mean slice of gossip about a friend with that friend. Use strategically and not too often, or you run the risk of becoming untrustworthy.

Often the whole issue of when to be honest dissipates when you tune in and connect with your heart. Your heart knows exactly what needs to be said and when, and it never is about the shallow stuff. Its feedback is always geared to bring more love to yourself, your loved ones and the world.

And remember,
Love Yourself no matter what.