Leadership, Vision and the Daily Juggle

Recently on the blog I’ve been talking about how real life couples are using leadership skills to make their relationships better. Here’s a story of Sheila and Tracy.* 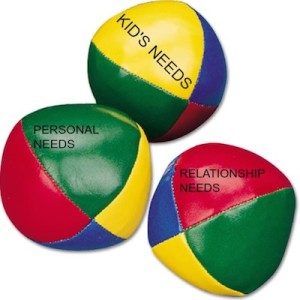 Sheila and Tracy finally had a date night. When they came in to talk with me, they laughed about it: “We finally get a night off, and we spend the entire meal talking about our kids.”

And why not? The couple had a clear relationship vision and task: To raise the three children they adopted. At first, they thought they were just raising the two-year-old boy that Tracy met and fell in love with somewhat accidentally, when visiting a foster care institution in her job as an education consultant. Sheila and Tracy agreed to adopt thoughtfully. It all seemed manageable until they discovered two other children in foster care homes that were siblings of their son, and the couple decided to adopted them all.

As you can imagine, it was quite a game changer.

18 months into the venture the two women had managed to get their three kids into decent schools and all were adjusting pretty well to their new lives. The baby was put in day care so they could both return to work. They were satisfied with their efforts, but thoroughly exhausted.

They thought it might be the exhaustion that was causing them to bicker. They were worried. They didn’t want the kids to see them fighting or be exposed to more damaging behavior from adults.

But Sheila and Tracy found themselves arguing mercilessly about logistics. Who was doing more household tasks? How was the middle child going to get to piano on Wednesday? When would Tracy have time to go back to yoga? Who was going to figure out the logistics of getting them to a family reunion in August? The stress became overwhelming, and threatened to destroy them.

In our first three sessions, as if we were looking at a business in a phase shift, we eradicated any blame and instead explored the competing needs in the family. We created priorities and structures (i.e. specific meetings) for them to talk calmly about logistics, so that the couple could remain steady in their roles as captains of the family ship. But even after this work together, they still found new ways to pick fights. It seemed that the fighting was serving an unconscious purpose. In snooping around we discovered an underlying issue: They both missed having sex. And yet they didn’t dare discuss it, because they wondered a) if it was even possible time-wise, and b) if it was even important now that they were parents.

Who, as parents (or even busy partners) hasn’t come across this dynamic at one time or another? And what, with all the limited resources, is a couple to do?

The awareness that they had completely dropped their roles as lovers when they migrated to parents began a powerful discussion about the importance of their union, what sex means to each person and what purpose it serves in relationship. They always felt better after physical intimacy, so why were they filling their alone time with fighting?

It was time to augment their relationship vision. Now that the kids were stabilized in something of a routine, the couple needed to return to nurturing their relationship and themselves and this included finding new ways and time to be physically intimate. They now saw the necessity of nurturing each other so that they could take care of and raise the kids more lovingly.

Slowly, little by little, Tracy and Sheila came closer. It was not a linear process. They could eek out a lot of closeness one week thanks to a generous and supportive Grandma, but that might be followed by a week in which logistical challenges, work and tension prevailed. But as they practiced, they began to unite around this new vision. They started fighting a lot less. Fights would begin and quickly dissolve as they realized how useless power struggles were in moving the mission forward. Fights that had purpose and were connected to nurturing their connection or raising the kids were more calmly negotiated until the necessary resolution was achieved.


They began holding each other accountable for making the space to literally hold each other. They each stood in their leadership as a team member: going to bat for their relationship and returning again and again to their clear understanding of their mission as a couple, as a team. They united in their simple will to come together.

After a year, they got the hang of it.

Now they are far more relaxed, more of a team, and getting through all the challenges of the daily juggle — sometimes clumsily, sometimes crankily — but mostly with more grace and laughter. And although I haven’t personally asked the kids, I bet they are enjoying their parents more, too.

*Names have been changed.