A little while ago I crossed paths with the most gorgeous, good natured, collarless puppy. I named him Brad Pitt-Bull and took him home. He was very friendly and well-behaved for a three-month old pup. Pit Bulls have scary reputations, but this little guy followed me around everywhere, obeyed all my commands, and waited for the chance to shower me with kisses, snuggle in my lap and fall asleep. 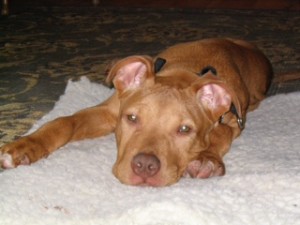 I talked to my “in the know” dog friends and learned that as a stray, I would have to test him. Good with other people? Check. Good with kids? Check. Good with food? After a few days of puppy love, I gave him a bone to chew on. When I tried to take the bone from him, he growled at me; a fierce, menacing growl. It was shocking and alarming: It was almost a feeling of betrayal. I clumsily tried to re-establish authority but was too startled and rattled by the Jekyll and Hyde-ness of the moment.

After I recovered, I looked into accepting all parts of the dog I was choosing to love, as I would do with a person. After all, he had been starving and probably had to fight for food. Apparently “food aggression,” the name for his condition, could be corrected easily with a little time and effort. I felt nervous and excited that I was being challenged to step into a new level of leadership and calm authority. But unfortunately, I could not get over the somewhat irrational fear that this little ball of love could hurt me, and might one day be a big (his feet were huge — the vet predicted ninety pounds!) scary canine with a mouth that could kill. As my fear grew, so did his growling, until one episode when I anxiously attempted to train him not to growl, it exploded. The growling and barking got so out of control, I stepped away in fear, and we both lost. I had to admit to myself that I am not and probably would never be the Dog Whisperer. I had found my limit: I could not live with a being I felt physically threatened by.

I felt relieved, but also saddened, so I went to a local music venue to get my mind off of the loss and the nagging sense of failure. I bumped into an acquaintance and her aunt. “You came alone?” she asked, with seeming fascination. “That’s amazing,” she said with admitted envy. “I don’t think I could do that.” While she pondered her limits of social engagement, I felt a little better about my limitations with my new short-lived best friend. Limits — I was reminded– everyone has them.

Limitations can be a blessing, and a tough thing to reckon with, especially in the face of the New Age theory that we have none. Some are easier to detect than others. If I decided today I wanted to be a professional ballet dancer, with my age, body type and physical issues, it wouldn’t happen — even if I could somehow drop my job and train for hours each day, I would never “make it” in a traditional sense. In a more realistic and challenging example, I recently counseled a woman who was struggling with the idea of having a second child, which her husband wanted. After deep contemplation, she acknowledged that at her age, with all the things she wanted to do, and with her hands full with her first born, her energy was limited and she decided to not get pregnant again.

While it can be difficult to acknowledge our own, limitations can be harder to deal with in others — coming up against people’s inability to listen, show-up or meet our needs in some essential way. The great thing about limitations is that they invite us into the true spiritual work of acceptance, and offer us the wonder of working within them. If we weren’t limited, we would not need each other. Understanding and accepting the limitations within yourself and others makes yourself available for connection, and for responsible and healthy living. It requires you to ask for the help you need, encourages you to use discernment in relationships, and prevents you from expecting too much from others and pressuring them to deliver beyond their capacity.

How do you know the difference between a limit and an edge? An edge is something that you know you need to grow beyond to get to the next level you want to be at, even though you may feel fear and resistance. Sometimes you may feel excited or inspired by your edge, other times not at all, but inevitably, you keep being presented with the opportunity to move beyond it, and something, sometimes simply your discomfort with your comfort zone, propels you to move forward and through it, like it or not. When you have hit a limit — everything inside says no. Can limitations change? Sometimes. If you are short — you will always be. But if you are selfish, there is a chance that you could, with great effort and consistency, move beyond it.

Shop at the Right Store

You wouldn’t go to a liquor store to get butter, and you wouldn’t try to find a fine wine at your supermarket, either. Yet that is exactly what we do in relationships. If you keep feeling frustrated with a friend or partner about a certain behavior they cannot change, perhaps it is time that you acknowledge their limits. The truth may ultimately be that your limit is that you cannot live with their limitation(s). But keep in mind that it is fruitless to think that everyone one of your friends will meet your needs all the time. So get to know who people are and what you can expect from them. With friends, family and lovers, know what they are offering. Appreciate who they really are and celebrate the best in them by accessing what they have to offer.

Find a concrete limit, such as your height, or a diagnosed physical handicap, such as a heart condition. Explore how the dimensions of this limit aid and hinder you. How does having this limit inform your vision of the world? What would life be like if you had different limitations?

When we are impacted negatively by another’s behavior, it can be important to let others know how their actions affect us. But so often we take our friends’ negligence too personally. Take a step back. Try to distinguish between the passive aggressive behavior we often read into things, and the limits of the person you are reckoning with. Imagine being in their body, with their story, pressures and habits. More often than not, we are dealing with a set of another’s limitations that hook into an old wound of our own, and exacerbate the feeling of discord. You may never be comfortable with another’s limits, but once you are aware of them, you can take responsibility for your reaction to them.

Open your eyes to how everyone’s talents and limitations create a sense of community. As a former city-girl who just became a homeowner, let’s just say that the scope of my knowledge and skill in home repair / improvement is vastly limited. I have a team of people I have collected to provide me with advice and service. Likewise, when those same people complain to me of their stressed personal relations, I have something to offer.

And remember, Love Yourself no matter what.

One response to “Limitations”