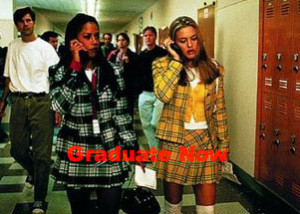 When is one qualified to be a leader? Now that it has been established by a variety of leadership experts (including Simon Sinek, Les McKeown, Alli Polin, and occasionally yours truly), that leadership is not just for the office or the arena anymore, but can happen anywhere by anyone — in families, on islands, online — are there prerequisite requirements to be a leader?

Personally, I don’t believe that a diploma of any kind is required for leadership.

The question that I am really interested in unpacking in this post is not about an intellectual graduation, but about an emotional one.

Close to a decade ago I found myself in over my head as the new owner of a Labradoodle puppy. I had never owned a pet that required so much care, attention and dedication. I was totally overwhelmed with how to raise her. One thing I made sure to do in our urban environment was bring her to the dog park every day during leash-free hours before 9am and after 9pm, allowing her to run and connect with other dogs and their owners.

I hoped I would make some new friends, broaden my community and get some good puppy raising advice. But I was thrown off task when I discovered that the dog park was full of cliques. There was the group of people who had clearly mastered their obedient dogs, (the super-cool, well respected ones). There were those, like me, who clearly struggled with their dogs (the not-so-cool ones). There were the busy, brownstone owning, moneyed professionals that had to be sure to leave at 8:30am on the dot to get to their jobs (important and cool), and the writers and artists who showed up at the tail end of leash-free hours so that they could be sure to sleep as late as possible but still get in a few minutes of free play for their dog (hip and cool).

I had no idea that I would feel so small as I gazed out over the field and realized that I didn’t know or fit in with anyone. The experience of discomfort was so strong that for about three days I arrived in the mornings acting as though I was a 15-year-old on my first day at a new school, wearing last year’s fashion. I kept my head down and seemed super shy. I completely forgot who I was. I had effectively regressed to high school.

Are the wounds we encounter at that tender age, when we become aware of ourselves as sexual-social creatures, really permanent? I was shocked at the accessibility of my old tendency to categorize people in a particular way, which left me with a familiar, deflated, disempowered feeling. I was also shocked, as I tried to break through my own madness by interacting with others, at how many other people were behaving as if they were in high school, too — only connecting with their cliques, standing in circles, turning their bodies away from “outsiders.”

Building community at the dog park took time. I mostly connected randomly with others that also seemed to be outsiders.

These days when I consult with leaders, especially new ones or those transferred from other companies into positions of power, their relationship to their high school wounds is quickly revealed. The situation of being a new leader in an already established system will naturally provoke insecurity and paranoia. When a leader is swayed internally by those feelings and begins to take actions akin to high school politics, assessing popularity and aligning with surface values, everyone suffers, because they end up becoming embroiled in drama instead of their work.

Although likeminded people in groups of all sorts tend to bond socially, leaders must also work against allowing strong cliques to form in their teams. [tweetherder]A clique culture can override team morale and create distance from the team’s mission.[/tweetherder] When leaders have enough distance from their own high school wounds to witness their own provocation and also see cliques forming, they can intervene by directing the energy back towards the work and inviting new alliances and partnerships to form for the sake of connection and creativity.

And that is why [tweetherder]I am calling on all leaders to at least emotionally graduate high school[/tweetherder]. We need to move forward. The wounds may always surface, but as leaders we can cultivate an awareness and discipline around them. And for all those brilliant leaders under 13 years of age, who have not yet been tainted by the seductive jungle of self-consciousness, keep at it. You could probably teach us elders a thing or two.

One response to “Must Leaders Graduate High School?”