The Myth of Lowfat Communication 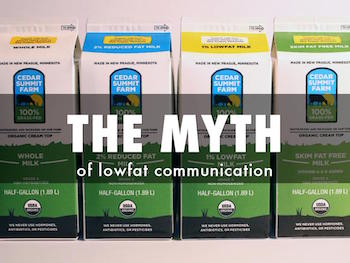 If you find yourself on a plane that is playing Judd Apatow’s film This is Forty, beware that watching it may actually make the plane ride feel longer, which seems impossible, given that it stars the delightful Paul Rudd.

But I mention it because it has a scene in which the protagonist couple tries to fight correctly, like their therapist taught them. They begin their communication with “I” statements, followed by feelings: “I feel sad when you lie to me.” Then, like good communication students, they pause, supposedly listen, and retort: “I feel scared when you overreact.” However, the structure quickly devolves into name calling and other therapeutically formatted attacks, e.g. “I feel you are an asshole.”

Why, when they “followed the rules,” was their fighting still so mean?

Because what each partner wanted, more than peaceful and clear communication, was to tear the other’s head off. When the aggressive impulse is lurking and leading underneath the content, no well-meaning model of communication stands a chance.

I’m sure you’ve been a recipient or giver of the dreaded “Oreo” form of feedback — in which you sandwich your complaint between two lovely pieces of praise. Perhaps you’ve studied non-violent communication, used “I” statements when reporting your hurts or repeated back what you heard your partner say in order to improve the chances of being understood. Although these and other models of “good” communication can be an important part of a well-balanced repertoire, I generally refer to programmed models of communicating as “lowfat communication.” Low or non-fat foods are packaged to be good for you, when in actuality the lack of fat (which is arguably good for you, but that’s another blogger’s cross to bear), is compensated for with toxic additives. What is sold as nutritious, can still be deadly.

What is so complicated about mastering conflict is that aggression cannot be cut out of the equation. Like all types of fat, all types of aggression are not bad for you. Some types are useful and actually healthy, and specific types, such as blame and violence, are lethal. When you try to remove all aggression via healthier means of communication, as in processed lowfat foods, it will be compensated for in passive and toxic ways.

More than correct format, effective communication requires that each person in a relationship take a moment to consider the intended outcome of the fight and the impact that the communication might have. Each partner must become aware of when their switch has been flipped and their desire to hurt, for protective or other reasons, has been activated. When the need to attack is present and overrides all other forces, it is extremely challenging to achieve self-control and make responsible choices. The impulse will be to continue fighting, but the more effective choice is usually to stop, tend to the upset, and re-group.

I invite myself and my clients to become familiar with their aggression through simple questions:

This helps them to have choices in the heat of the moment, before they’ve crossed a line and created a rift that cannot be undone.

A large degree of emotional sophistication needs to be present in order to detect aggression within and make the right choices around it. Most people do not want to acknowledge their aggressive and destructive impulses because they are painful to bear witness to. “Not me! I am not angry,” they say, and in so doing, they cut themselves off from the very knowledge that will teach them about their sensitivities, their boundaries and their power. They may look at the characters on the screen or at the table next to them and say, “I would never act like that.” Then when they unconsciously slide into tantrums in the boardroom or the bedroom, their judgments render them blind to their own out-of-control behaviors. Such people will never fight fair. You cannot refrain from acting on a vicious impulse if you cannot admit that you have one. Click To Tweet

But really, there are no rules. Sometimes, as in the following example, giving way to aggression can be authentic and effective. I recently worked with an executive whose biggest fear was being accused of being a bitch. She was so disciplined and careful about not raising her voice or escalating with her staff that she went on frequent walks around the block and trips to the ladies room in an effort to diffuse her activated emotions. Her staff jokingly referred to it as her “time out.”

But there came a time when one of her directors pushed her too far. After being chided repeatedly for lateness or outright absence at important meetings, he lost his phone and was practically unreachable two days before an important deadline. He didn’t bother to let people know why he was out of contact because he thought they’d just try to reach him via email, but that was expecting a lot during a time when no one had extra time to plunk out complicated inquiries and directives.

When he flippantly defended himself on the matter, she authorized herself to give it to him. Somehow, after all these years of good behavior, she let her anger out full force, even in front of a few others. Miraculously, it was the right move. It finally alerted him to the impact he was having on the whole office, and others were relieved as well. People showed her respect. He was indignant at first, but quickly straightened up.

Because it has been a large part of the subject of my Relationship as a Team series, I have been rightly accused of “focusing a lot on fighting.” I stand by my belief that since conflict is an inevitable and healthy part of a working team, paying enough attention to master it is worth it.

So here’s what I want to say to you after four posts about fighting fair: Give yourself a break. Eat some real fat. Give your humanity, of which aggression is an irrepressible force, back to yourself. Learning how to fight well is a long journey, with many road bumps along the way, in which you will get lost, foggy, bruised, and yes, on occasion, even mean.

Let’s hope the casualties are few and far between.

And remember, Love Yourself, no matter what.

Do you resonate? How do you lead in relationship? Leadership skills can help reduce drama and increase fun, creativity and satisfaction in our relationships. Want to learn how to stand in your authority in intimacy? Don’t miss your chance, in the Intimate Authority Online Course

16 responses to “The Myth of Lowfat Communication”