Leadership Lesson: Saved By the Task 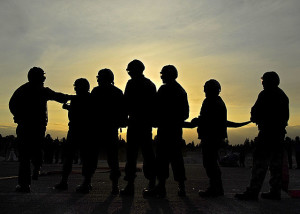 I discovered something essential about being a leader many years ago during my drama therapy internship at the West Haven Veterans Hospital. I was left in charge of eight burly Vietnam veterans to run their weekly “relationship lab”; a group which used improvised scenes to explore styles of communication and the effects of PTSD on interactions.


My supervisor thought I was ready to lead it solo. I wasn’t so sure. As veterans of this weekly group, the men knew how the group was supposed to go, but when they realized that I would be leading without my supervisor, they seemed listless. They sat with their arms folded defiantly across their chests. I was overcome with doubt. These men have lived through a war. I don’t know anything about that. They don’t want me here. I can’t do this.

I tried engaging them in devising a good scene for us to work with. But the men sat, hostile and mute. I was pulling the group through molasses. I invited two men to volunteer for the first scene. Nobody moved. I waited. The tension thickened.

I felt like the lame teacher in Ferris Bueller.

After an excruciating silence, a bearded gang leader glared at me and queried, “Why should we trust you?”

It was an honest question that I had no answer for. I was completely stumped. I wanted to crumble. I wanted to run out of the room in tears and knock on my supervisor’s door for rescue. And then, amidst all the different pulls of that moment, I thought: “You’re not here to run. Your here to be a therapist; to lead this group and do the work.”

My true task presented itself in bold relief. I held onto it for dear life.

And what came out of my very dry mouth was: “I can understand that. I don’t know why you would trust me. We’ll have to find that out together — if you are willing.”

The tension decreased as they took that in. I hadn’t crumbled and therefore earned some respect, but the testing wasn’t over. Still, no one was willing to get up and do the work.

“I’ll be in the first scene if someone will join me,” I offered.

I sat down in the stage area and waited. Finally, someone else got up there and we played a scene — a conflict between two Vets, one who wanted to borrow money from the other for suspicious reasons. The men identified with the drama, they engaged, they laughed and nodded with recognition. The ball was rolling.

When I traded places with a guy who wanted to try playing my part of the scene in a different way, I sat down, right next to the angry pack leader. He looked me in the eye, softer now, and said, “Sorry about before. I don’t know where that came from. You’re alright, kid.”

And the group took off. Afterwards I went to my supervisor’s office and shed a few tears of relief. I had stayed on task, and I knew now that no matter what, I could. There had been a victory on the battlefield.

When you feel off at home or at work, when others are trying to suck you into their drama, if you can remember what your task is, you can steady yourself, and reclaim your leadership. What is it that you are really doing at work? It’s not being a Vice President, or a director, or a file clerk. You are overseeing specific things and people, shaping how the work gets done, and seeing to it that papers get properly sorted for reference. Your task is to direct or carry out something specific.

Find what that is, and let it guide your actions.

2 responses to “Leadership Lesson: Saved By the Task”