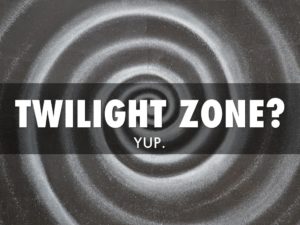 I for one will never understand why Donald Trump’s candidacy did not end at “grab ‘em by the pussy.”

Well, maybe Mueller has some key intel that will one day help me make sense of it, but until then, when people harrumph and slap their foreheads at the latest presidential gaff, exclaiming, this time he’s really done himself in!, I just shake my head and roll my eyes, because I still can’t get over the fact that it didn’t end then – and since it didn’t, it’s difficult to believe it ever will.

For me, the 2016 campaign was when the country tip-toed into a topsy-turvy world, arriving on Election Day in a full-blown episode of The Twilight Zone. Where were you that fateful day? I was feeding my voter sheet into the machine with a shit-eating grin, thinking that tomorrow, tomorrow! a woman could be – no – will be the president of the United States. And a highly experienced and competent woman at that!

And later, I cradled my carefully prepared hors d’oeuvres in their pyrex roasting pan as I transported it to what would surely be the victory gathering, only to feel the pit in my stomach swell as a sea of states turned red. It was like being on the Titanic – here we were, traveling in an incredible vessel of human achievement, and suddenly, we’re out on a deck in the frigid night air, wondering what went wrong while waiting for a lifeboat to come by, fancy music barely masking the screams of those who will inevitably perish.

But counterintuitive to the natural and inconceivable man made destruction and loss of this past year – many people I meet – even a few jarred by tragedy, are also hopeful. Raging; sad; at times distraught . . . but hopeful. Not just due to the political sea change of this year’s elections, but due to the joy of waking up. People are waking up. Conversations never had before are being had publicly. The destructive forces are finally being called out. As women’s wrath turns towards the likes of Harvey Weinstein – and even men’s wrath, too, a la Kevin Spacey – we’re going after predators hard, and it is significant, and way overdue. And I can’t help but wonder if the vehemence isn’t also connected to the predator-in-chief, who continues to slip roofies in our drinks with senseless tweets and sensationalism, while raping the values and foundation of what this country was built on?

A year into The Twilight Zone, what can we focus on that connects us to a better world, makes any sense? It’s got to be hope. And our personal sense of integrity. Action, within reason. And the faith that, as we try to stop the damage, it all will, eventually, end . . . even though there is real risk that this episode could wreak havoc and a destruction previously unimaginable. Not to be cavalier, but destruction is, after all, a natural part of the cycle of creation. Like forest fires raging through the woodlands to make room for new growth, it is inevitable. All things blossom, die and then . . . return. Right?

In my personal life, I was recently faced with inevitable deterioration after visiting my fiancé’s rapidly declining, 92-year-old mother. Driving home through the winding countryside, we were silent. Gazing out at the gold, red, rusts of autumn against a blue, blue sky, I finally blurted out:

After a thoughtful pause, he added, “But everything dies.”

To which I responded,”That’s a fact.”

And then the full lyric from Springsteen’s single Atlantic City bubbled up and I queried out loud,”But maybe everything that dies, someday comes back?”

Then we debated about which version of the song was best: Springsteen’s original, Levon Helm’s, or my childhood buddy, singer-songwriter-turned-photographer Kim Fox ‘s and You Tubed each one for a listen and a vote. (Kim Fox’s haunting version won hands down. Warning: it could be stuck in your head for days.)

“Everything dies, baby, that’s a fact.  But maybe everything that dies, someday comes back.”

Given the state of the world, perhaps, this is good news. As long as what comes back does so new, and majorly improved.